My UP PTAA run and my excess baggage

Lacking training and sleep, I still joined the 10K UP PTAA run. Why not? (the ad says I can still win those raffle prizes just by registering…hahaha). I knew this won’t be a good run for me. I am not even familiar with the route. Oh well, this will be my LSD for the week (conditioned my mind so I won’t be disappointed if I would be slower than my first 10K of 1:16). My goal is to finish without injury.

I planned to arrive early but I didn’t realize that UP will be that far to drive even in the morning. 🙂 I arrived with enough time to go to the restroom and in time for Fr Robert Reyes’ blessing.

that's Fr. Robert Reyes blessing us (really, that hand with a bottle. that's him! that's all i got to capture.)

We checked in immediately after the blessing. I saw Coach Rio (didn’t know this was his race). Oh well, this will be an organized race afterall. I think I don’t need my hydration belt but I’m parked quite far so might as well bring it. I saw some friends also I haven’t seen for years – Noli (former officemate 03-06) and Vicky (from Shakeys in 01, I only see her in FB).

starting line, while waiting for jopeng

At exactly 6am, the race started!

I was running with Michi for the first km. Michi asked if I have practiced with my belt on. Oh no!i am getting uncomfortable. I should have at least ran with it. Jopeng joined us, that time I slowed down and maintained my pace. that time, I feel good with my belt already. First water station-oh great! Its not balde system. Wow! I wanna throw my belt but no, its 2k…haha just have to carry it to the finish line.

The race was well organized, marshalls were everywhere. I was hoping the turning points would indicate how many more Kilometers is still left so I can gauge my time. The route was nice with the shades of the tree almost throughout the route. though when it was turn to go around the same path again, I started to get bored and feel tired.

Even with lack of sleep, I tried to run the whole time. This is my resolution. I slowed down only after every 15 minutes and jog/walk for a minute.

On the last 2k, I felt hungry already. But when I looked at my watch and its still about 60min, I started to run faster. when I reached the oval again and made a left to the finish line, I tried to run my fastest (not really, the fastest but the best I can at that moment) so I would finish better than my last 10K. I reached the finish line at 1:11 (yey!) not bad! I saw michi and jopeng at the finish line and joined them.

Stretching then some photo ops… 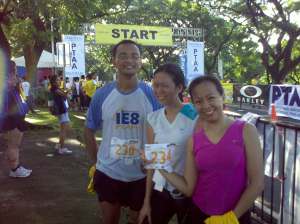 I wonder where Vero, Rhea and Donna are. Did they make it? I was looking around for people having their photo-ops. Definitely one of them. Finally saw them at the line for finisher’s shirt. 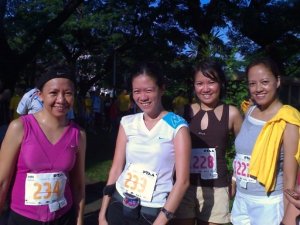 When its UP, you got to try Rodics (tapa for breakfast!!!). So we went there but there was no seat. So we ate at the one across Rodics. I saw Josie and Joanne again (they just had tapa from rodics 🙂

With Josie and Joanne

It was a good race. I improved on my time by 5min, inspiring me to strive and get better. And my body doesn’t sore at all, unlike in previous runs.

On another note, this is probably one of my runs, where I had the chance to reflect. I just can’t help it with the nice environment. No worries, I was doing this with open eyes. As I was running and was trying to get used to my new hydration belt, I thought it was better if I was running lighter and if I just relied on the water stations. just like the real race I’m running, I got some baggages. I continue to carry them out of worries on what might happen if don’t have them. Maybe it’s time to give them up. Maybe it’s time so I can run the race better. (sorry, i’m not blogging what it is….its in my personal journal hehehhe).