Blast from the Past-My Holiday Runs

No, this is not going to be a movie review (I haven’t turned into one for the new year).  Though right now, I do feel like a naive Adam Fraser coming out of the nuclear shelter as I blog  again.  Where shall I start?  My stories are all so ancient already… 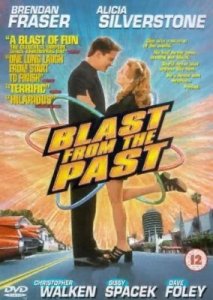 But, of course, before we move into another season, let me greet everyone a Merry Christmas and a Blessed New Year! 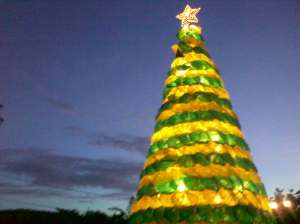 So, where have I been hiding —— or running?

As the advent season started, my training for the Condura Marathon officially started (Yes, a bit late). So, let me rephrase it.  It was the time I strictly (or at least near to it) followed Coach Titus’ training program.

This was one of the races affected by Ondoy (ohhh you’ve read all about that)…..I’ve never done the hills.  In fact, I tried to avoid it especially when I’m in UP for long runs (I always find a better route).

I’ve never been to Corregidor.  The first time I read about this, I got so excited, I posted it to all my running buddies’ FB wall…Too bad though, most of them are either on a retreat or out of the country.  So, until five days before the race, I still am convincing friends to accompany me.  “Walang multo, promise!”.  Thanks to the adventurous Jinky, she accompanied me (and got her first taste of a race —- – Congrats Jinky for your first run – 3K of hills – wow!)

It was a picture-taking-mode race, couldn’t post all so I made a video to checkout my Movie Maker 2.6 ver.

I wasn’t registered for this race.  But at the last minute on Saturday, I decided to just register on-site and join some friends from my prayer group Leo & Mike (doing their first 10K) & Michie (my running buddy since day one but is ALWAYS out of town or out of the country)….

I just got myself a new shoes (to say goodbye to my newtons).  The plan is an easy 10K and run another 10k to break-in my Adidas Supernova Glide. 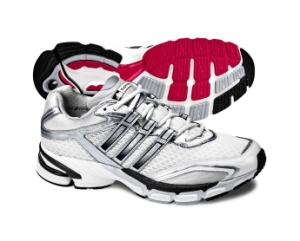 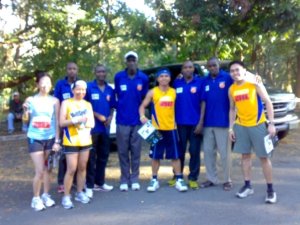 with the Kenyans....they are still here, huh!..... I really don't need a pic with them as I always train with our own "Elites" ( & soon they will dominate the races, even with the Kenyans around)... 🙂

It was a good 10K run, though I had to stop for five times to tie my shoe laces.  Lesson learned again —-

I was planning on running another 10K but since the race started at 6am (not 5:30 as announced), I had to go home and head to Tagaytay for my sis’ prenups shoot. (which somewhat turned out to be ours as well)…..From race mode, I had to switch to “Stylist” mode on the way up. 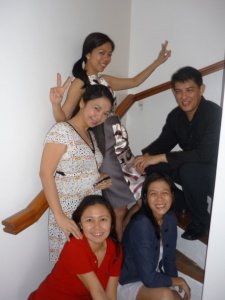 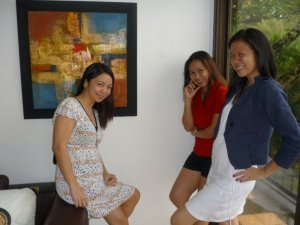 Now, this pic shows another problem. Ang itim ko na! And the gown is plum & mettalic gray. I have two mos to get lighter, while training for Condura - How do I reconcile that?

A Week of Parties

After the Mighty Run, I have prepared myself to a different kind of Marathon, Party Marathon.  As much as I would want to attend all of them, I just prioritized those in the ortigas area for reasons it is near Ultra.  The good thing is I am able to squeeze attending the Speed Trainings at Ultra before my parties.  The bad thing is my friends thought “wet look” is my new ‘peg’.  For the week, I was able to juggle running, work and partiessss except for the Saturday party which is expected to end to sawa as it is our annual barkada get-together. 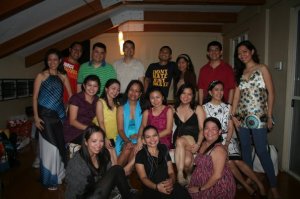 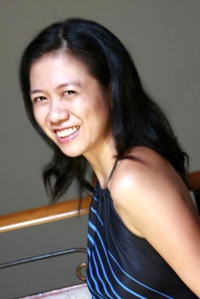 I came as Serena without Dan...thanks to John Rich, our official photographer. 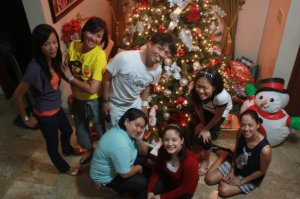 With so much carboloading, and with the Rizal day 32K run coming, I know I can’t afford to be a couch potato (on an after-party mode).  Thank God for Coach Titus!

On Saturday, just before the party, Coach & I went back to Mc Kinley hills ….It was a good run – hello hills!

Monday was supposed to be my rest day but since I partied the weekend, I dragged myself to run.  I  joined coach and Capt. Chris along Valle 2, Green Meadows, Corinthian Hills till Edsa (which is our turnaround point).  I have never tried this route even if I live in the area.  It was a good run, kwento-pace until we reach Ultra.  I was happy and ready to relax, when Coach surprised us with the last 2K drill.  He does it everytime.  And I’m starting to love the drill and hate  coach (hahaha).  During this run, Capt asked Coach re a road he always see when flying.  And Coach said, That is C6, Takbuhin natin sa 24? .  I pretended not to hear to stay away from the plan…..

But Christmas Eve comes, and there am I, running C6 with Coach, Capt. and Mesh.  We saw I2runner Natz on the way to Bicutan.

It was a good route.  You can feel the breeze of Laguna de Bay.  The road is not open yet so there were only a few motorists on the road.  We ran towards the Bicutan Exit then back to the Taguig exit (where we are parked).  That was about 8K.  Had water break then went towards the direction of Pasig.  …Another bonus was there is Taho on the road. (Thanks for the treat Mesh!) 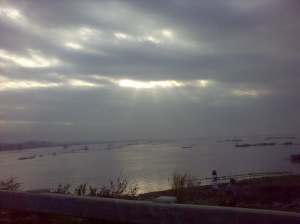 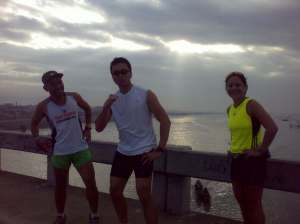 Coach, Capt Abella & Mesh at the Pasig Bridge at Sunrise... 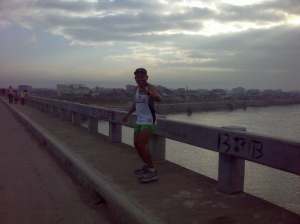 We ran another 5K after the bridge which is mostly rough road.   Mesh and I were worried of the very white shoes of Capt (hehehe).  The last 1 K was a slum area.  We still ran till the end.  It was a good sight to see on a Christmas eve (makes me reflect and appreciate what I have).  I said a short prayer for the families as we were running.  A few minutes and we are back on the cemented road.  Oh no, Merry Christmas Coach!  There we go again, SPRINT for last 2k!

I definitely would not miss this race.  Aside from its perfect timing with my training schedule, it was organized by BR for the Elite Team Bald Runner.

This was my longest run…and definitely my best run for the year 2009.  A great yearender, and a start of the many first. (FM at Condura?).  I purposely didn’t register yet for Condura until I get to finish the Rizal Day Run (still alive and walking).  Thank God, I did in 3hours and 34 minutes! 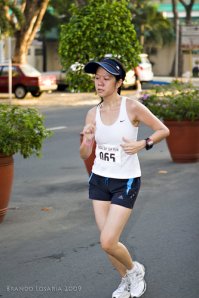 after the second loop - Thanks to Brando Losaria for the picture! 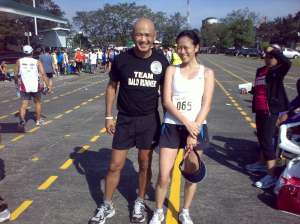 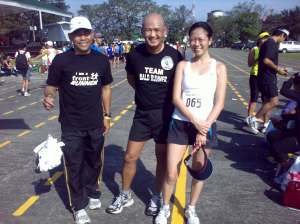