Conquering the Skyway & My First Full Marathon… Definitely Not the Last….

I have been waking up every hour, I’ll say a prayer and get myself back to sleep then wake up again…Its 1:30, might as well get up so I won’t have to rush.  Called up driver (call time 2am) and was so praning giving instructions on his waiting area while having breakfast…….It is race day!

Fast forward to 3:30am, I am already standing at the starting line for 42Kers – yes, a full marathon! Allow me to digress and flash back:

Back to February 7, at quarter to four – the mood was so festive, it takes away my nervousness.  I saw BR clinic buddies Mark, Nam, Randy and Jerry-they will run together.  I know these guys are gonna PR so I stayed behind.  Michi and I will stick to a 7 pace for the first half.  I was chatting with Iah minutes before gunstart, getting some pointers on the use of GU -thanks Iah! …… 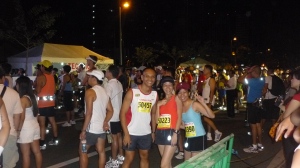 With my Good Friends from Lingkod - Jopeng and Michie...We will run a good race...at a good pace!

“I gotta feeling, that tonight’s gonna be a good night…”

I' gotta feeling....Yes, It was a good, good race! Thanks to Ton and Patrick Concepcion!

First Leg: Start to Bayani Road and Back then Up to Buendia

The plan was to run the first half at a 7min/k pace.  Garmin says, we averaged 6:45 peaking at some point to 5, especially at downhills…Jopeng and Jim stayed behind to keep themselves from speeding up, conserving energy for the crucial leg.  It was also my first experience of running in the dark.  (I wonder if the reflector was working). I took my first GU gel at Kalayaan flyover…(I hope Norman is able to drive to Petron in time-I need to get two more GU for the 20th and 30th k)..

So happy to see Norman at Petron, everything is going on as planned.  I took two GU and some beans and sipped some Gatorade.  Then we’re off…oops…we forgot to take pics 😦

Setting my foot on the skyway, after a few hundreds of meters-I thanked God for bringing me that far! As I read on one of the inspirational signage- “The miracle is that I had the courage to start….”… This is a miracle in itself -I have conquered the Skyway!

We maintained the pace -Jopeng, Jim and Michi…high five each other for each kilometer done!  We are nearing halfway!  I had my 2nd GU gel at that time.  Nearing the turnaround point, we saw friends running back.  It feels good cheering each other as we make our way to the 22nd k.

From afar, we can see the Skyway Interchange leading to NAIA with runners climbing.  I remember the first time I saw the interchange while driving, I said – “I could never drive that road.”  (really, I have fear of heights)….

Climbing the hill turned out not that bad at all with a Band playing whose rythm seems to be in tuned with my every stride.  And there goes the downhill! This is it!!!  Condura hill conquered!

At the turnaround, the bystanders (don’t think they are marshalls) were taking our pics using their camera phone while cheering us.  Thanks to the Manongs!  Pa-mms ng picture namin ha…hehe (I forgot to give my number).  It sure was a boost as we approach the 30th (defined as the wall!)

As we climb back to the skyway, garmin says 30th.  It probably was the longest distance where there is no water station in sight.  And the sun was up! (Or was it just psychological, as they say this is the critical distance, a critical point).  I chew the remaining beans I have.  A few meters away – water station is in sight!  Thank God!  I took my third GU then…It wasn’t a wall after all.

Michie asked me at that point if we are not taking a walking break.  Me: ” I didn’t really plan to but if you want, I can just slowdown my pace.”  And there she goes speeding up.  Walking break nga…

And then we landed…

As we approached the Buendia off ramp, it was so refreshing to see Maricar Sugayan (she is a former member of our prayer group, Lingkod – and have been running marathons even when it was not a boom yet).  I haven’t seen her for a while, we wanna make chika  but I guess we can do it some other time.  Thanks Atty! 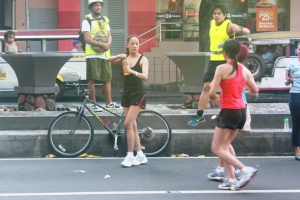 Rhea is so ready with my Gatorade! Thanks bestee!

Seeing Anne and Rhea – friends since high school, Ate Benette – cousin and good friend and my Pilak layouting buddy, Lyrah and Leo – friends from Lingkod was a great, great booster….Thanks guys!  I know you waited for an hour and saw us for two minutes…

At this point also, I am to decide if I can push further or not.  And I decided to push….

And what more can I ask for? Bessie ran with me from that point onwards.  I told him, we’ll do a 6-6:30 pace.  At that point, I was concentrating on my pace and I started conserving my energy.  Bessie served as our Ambassador, shouting back- Thank you Manong! Good morning! and Go! Kaya pa! throughout…..

As we went down Buendia-Kalayaan flyover – it was a surprise to see bestees Anne and Rhea again…So I got great pictures.  Anne told me, except for the fact that I am all sweaty, I still was so hyper and doesn’t look like I’ve ran a 37k already.  (We really are friends!)

The Last 5K After the Buendia Flyover

The Longest Five-Kilometer Run of My Life So Far

It’s 5k to go, yet it seems so far.  At this point, all I could think of is putting one foot infront of another.  I had my breathing in sync with a silent chant – left,right,THANK GOD!…..Until I got distracted by my own shadow.  OMG! My hair is a mess —- haha…I fixed my pony tail at the last 2k and again at the last 500 meters.

As I made my last turn from 32nd street, people were shouting “Congratulations!” Marathon done!” etc., etc…Thanks guys!!!

Turning left to the finish line…I could hear cheers: first – friends from Lingkod (who were near the corner), then my Bosoboso LSD friends (Jan,Neil and Ysmael and others), and my BR clinic training friends-Randy and Jerry plus everyone else.  I heard someone shouting – 4:49-Go! Sub 4:50…Oh faster and woah 4:49:14….I could hear cheers on the background and I could not define how it feels.  (feels like you wanna hug someone —– Buti na lang ang nasa end ng railings si Tere).

Tere and Nam at the Finish Line

Indeed, to God be the Glory! Thank God for the strength and for blessing me with good friends who helped and guided me in this feat. 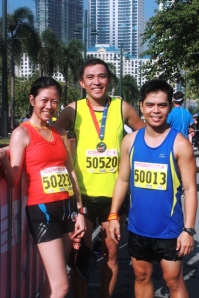 with Randy and Jerry - thanks guys! 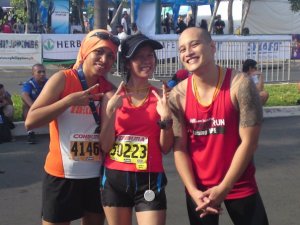 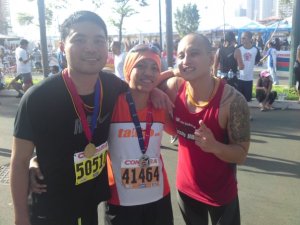 Thanks to the Elite Team Bald Runner —– the Wannabes owe it to you! especially to Frank and Alquin…Congratulations!  They are not only fast, humble, helpful and fun to train with.

Thanks to Coach Titus! —- For being patient….I can hear you saying at the skyway: Bounce, Bounce! Quick,Short Stride! Takbong Tamad! —- it works Coach! —- the different running styles we learned from you saved me from tiring my muscles, shifting from one to another when I feel like I need it.  No injuries! Decent Finish Time….and no dead toenails this time 🙂

Thanks to Bald Runner – Sir Jovie, You really are an inspiration to us!

Thanks to my Running Buddies from Lingkod – Michie, Jobaqs and Jopeng! from UP runs to Antipolo, from 10ks to a Full Marathon….We will continue to run the good race! And our team is growing!

Team Lingkod-Ligaya - Kudos to the Five new Marathoners and two Second Timers who broke their PRs!

Thanks to my friends – to those who were physically present to cheer and support us and to those who prayed for us! 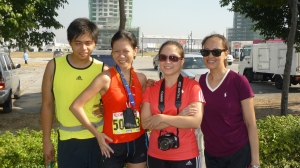 My two Bestees and Bessie

And the story continues……what’s next?