At Kilometer 50, I couldn’t help but be amazed at each runner as they cross the time station.  Running 50K for about 5 to 6 hours already!  You can feel their pain but the smile on their faces were so inspiring, we’ve forgotten about our own tiredness and hunger.  (By this time, I probably have finished 5 lollipops already).

Much as we wanted to see everyone cross the 50K market, we were given a new order – that is to buy ice and reach the finish line before the first runner arrives.

As we leave the 5oth kilometer marker, we can already feel the gruelling heat of the sun.  A few kilometers, and the dust of Pampanga is all around us.  Why am I complaining? I am inside an airconditioned car while the BDM runners can feel  the heat of the sun and the hot wind blowing dusts all around.  Wow!

We drove faster until we reach kilometer 70 where we found a store to buy ice.  Before crossing the bridge, we saw the two runners from the military – Laya and Marquez were still in good form (and without water!)  We gave the last few bottles we have.  Marquez eventually DNFed while Laya finished fourth despite the injury he had at the last leg.

After a few kilometers, we saw the third placer at that time…he hold on to the post till his finish.

A few kilometers after, we saw second placer – Private First Class Bumahit.  He was run-walking already by that time.  Turned out he has no more water – so we gave him Gatorade.

We’ve been counting the markers but there’s still no sighting of the first placer…He was really fast!  We were then worried he might have crossed the finish line…..until we found him at the 90th kilometer. 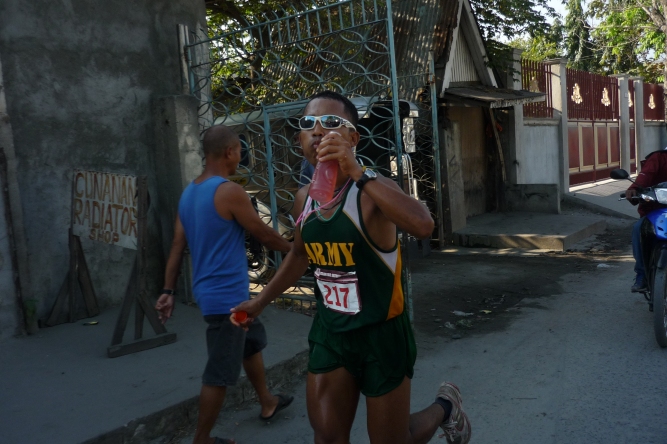 Alvin Canada at Kilometer 90+...These guys do not have any hydration with them. Good thing we caught up with him..

We waited for Canada again at kilometer 96 to get a good shot. But he… ugh…was in full race mode. I wanna ask for a take two but he was nowhere in sight immediately.

Finally drove to the finish line.

At around 9:30, Corporal Canada arrived! 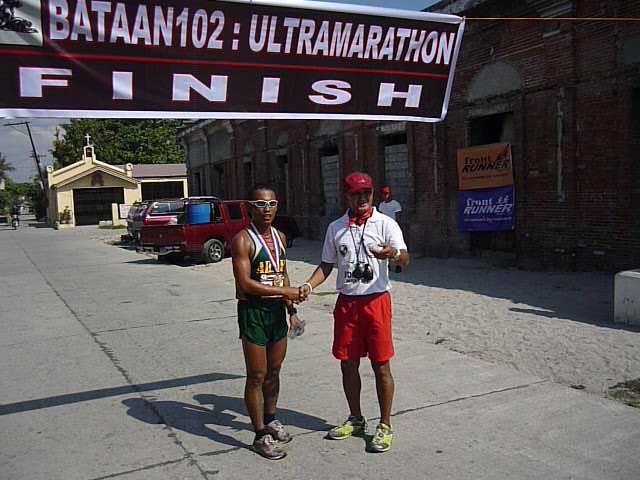 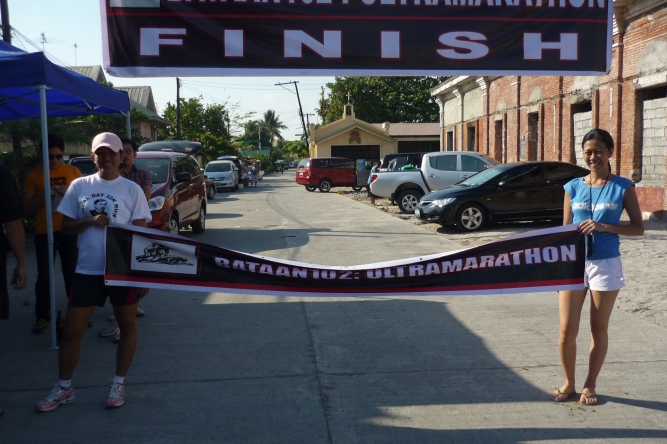 After 50K of Sweeper Role, we got promoted to "receptionist aka poste" role at the finish line

We waited at the finish line until the last runner crosses within the cut-off time. It wasn’t an easy job, I realized.  I learned the art of holding back tears as each runner crossed and the shades helped! As in awww feeling…BR made it clear that he will hug the male finishers and kiss the female finishers – so we were confined to our poste role =) Oh, except for our dearest training buddy Nam & Dennis – we stole the scene from BR.

Our mini-BDM trophy as Race Volunteers/Sponsors- I want a bigger one for 2011!

Congratulations to SIR JOVIE NARCISE (the BALD RUNNER) for a very successful race! And to the team behind :the Elites, the Coaches, BR Staff, Tita Rowena – you guys rock!