Smiles of First Placers at The Miles for Smiles

For some people, it takes time, sweat, the occasional tears and total commitment to yield one beautiful smile. The team of doctors and surgeons that make up the Noordhoff Craniofacial Foundation Philippines, Inc. (NCFPI) do just that on a weekly basis as one in every 500 Filipinos are born with cleft.

Jan Imperio brought up the idea of joining the run as a group.  Registration fee is P1,500 per runner, totalling P15K for the team.  That would be more than enough to bring a Smile to one child born with cleft.  Expensive but the cause is worthy!

The run will be held on the Sunday before PAU P2P 65k Ultramarathon, at this time we should be tapering already.   With a total target distance of 20k for that Sunday, the 16K race would be a perfect tune up.

After clearing my sched, I confirmed with Jan.  A week before the race, the group is complete with ten members.  A child would definitely get his/her smile on while ten runners would definitely have a good 16K Sunday run!

This is probably one of those Sundays that I really feel sluggish.  I wasn’t in the mood to run.  It’s probably because my body has been looking forward to the taper day (after all the gruelling long runs!) and it is shouting for a Sunday Rest Day.  (Dear body, Sunday is for long runs/races. )

Our team was early at the starting line together with some teammates from Team Bald Runner-Professionals who registered individually.  I set my garmin to run at a conservative average pace of 5:40.

It was an easy start.  I was running at an average of 5:10 to 5:20, yet I felt comfortable.  The regular tempo and speed workouts plus consistent long runs have paid off.  At the first turnaround, guys would signal that I am number 2.

I didn’t push my pace even when I saw the leading girl at about 300 meters ahead of me.  (Fight another day, they say.)  It was chaotic after the first turnaround.  We had to run on one lane going against the traffic of the mid to end pack of 16k runners.  I saw my average pace going down to 5:30, even 5:40.  Sometimes you tend to lose the steam.  There was one male runner in white who would sprint ahead of me on the sidewalk, slowdown and block my way.  (Later on, I understood why he was like that but hmmm who cares and who got tired?)  There was traffic again at the intersection as the marshal wasn’t able to control them.  After this intersection, the roads were clear.  I continued my run and didn’t mind the potential podium finish (as I am registered with the group).  I pushed my pace to maintain it at 5:20 to 5:30 or lower.

As we entered Heritage Park, I felt the pain on the arche of my right foot that I had last Sunday.  (I really find this route…ugh…hard, enchanting & just challenging).   I tried to roll my legs faster; faster turnover, less ground interaction, less pain.  I could sustain such running style so the pain won’t be felt until the end but I remembered Alquin Bolivar told me that it would be more harmful even if it’s less painful (In fact, I didn’t do the scheduled Yasso for the week so as not to aggravate the sore foot.)  I slowed down a bit and dragged my right leg at times to lessen the impact on the ground.  It was bearable but I have PAU the following week and that became my priority.

Got it! Nearing the finish

Fine! It didn’t really matter as I was there for my tune up race and to be able to help sponsor one child’s operations.  (Of course, my bubble thoughts have: “Sayang” in it).

After about five minutes, the whole group is complete and we went to our cars to recharge. We went off for another 4K run around the Fort Triangle.

We were about a hundred meters away from Honda when we heard the host shouting “Thank God It’s Sunday!”*   That is our facebook long run group?!? Did we actually win? She said the name again and we started running.

That was one dramatic entrance – sprinting our way to the stage!

We finished first place after averaging our finish time! —- Surprise! Surprise! (Note: We finished one minute ahead of the second team.  But apparently we could have finished way ahead as they timed me at 2:00-the RFID didn’t get to capture my time & they took it as 2)

BLISSFUL! The ten of us on the stage, receiving our gift packs, gift certificates, plaque and two medals.  We joined to make someone smile, we went home with SMILES.  (still smiling until now!) 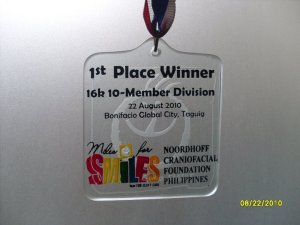 And to make the morning more eventful, I accidentally dropped my medal and went home with a 6-piece First Place Medal.

Still feels good though….We ran the Miles for Smiles and it made us Smile!

Thank God It’s Sunday is our unofficial group name in FB which later on became official after this win.  We’ve been scheduling long runs together.  Most of us have attended the Team Bald Runner Speed Training clinic in different batches.  (Note: The batch doesn’t necessarily reflect the age; more of, the year we started seriously running).  We have different sub-groups-Team Bald Runner-Professionals, UPLB Mountaineers, TFC and friends.  We usually run out-of town.  (Buy the Front Runner-July issue and oh, wait for Sept issue as well — You’ll have a glimpse of how crazy we run on Sundays.)