Camsur was not in my plan for the year.  I had plans of going somewhere with my family as it would fall on my Mom’s birthday (and is three days after my birthday).  Plans changed, I decided to book my flight, my hotel and register last July, few days after the Milo Marathon.  So, this will be my third Marathon for the year!

After a simple birthday dinner on Thursday night, I had to be home early to catch sleep and double check on the stuff I have initially packed.  Had to say no to all the usual late night birthday celebrations.  I DNF’ed my own party.

Hot! – It is an understatement, the heat was piercing through as we get off the plane.  Probably, we’re adjusting to the weather as it was gloomy in Manila.

Friday was relaxed, explored Naga, or actually, SM-Naga! It was more than the needed carboloading, our eyes were shutting down as early as 4pm. 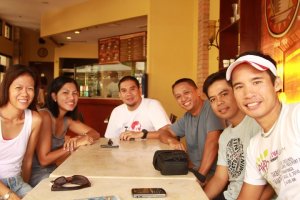 It was another lazy Saturday for us.  The rest of the gang arrived and we took an easy day hanging around CWC after  breakfast in Naga.

My Team! Team Ultra (BR Professionals) and the TGIS gang

Team with the Bald Runner

CWC is fifteen minutes away from our hotel.  After the usual race morning routines and an oatmeal breakfast, we were off to the starting line.

There were about 400 runners for the 42K distance of the  Camsur International Marathon.  The front row was flooded with elite runners – Ethiopian, Kenyan, Russian and of course, our own elite runners.  Behind the competitive front row were the usual faces you’ll see in Manila races and PAU events.

I had no plans for this event, no expectations.  I must enjoy my birthday run, though I don’t plan to DNF at the 35th.  I planned to take it easy at the start and listen to my body.  My training preparations were not focused on any target time, it was more focused on having the endurance to run ultramarathons.

So, off we go at 4am after the fireworks!

I was running alongside Jerry, Neil and Smacky.  It was still dark.  The plan was to take a 6:30mpk pace at the first 5k.  After the first water station, I started to zone out and focus on my breathing and forgot about the plan. Strictly followed the plan at the first 5kilometers, huh!

After 5 kilometers, I took a slower pace and ensured I maintain an average mpk of 6+ a few seconds.  (it’s still so far!)

I initially thought of doing an interval of a fast 1k, then slow 1K.  After 10K, I decided to just focus on listening to my body.  I just ensured that I maintain a pace not slower than 6:10mpk.  I  would slow down when my body says there is a need for it.  I do not stay long at the stations but made sure I make the routine of one gulp of water, one cup on my head and sponge to cool me down (oh, and clean up a little!).  I tried to do all the routines per station in less than 10 seconds.

I took one GU Gel (espresso love!) on the 8th kilometer and one sports bean every 5kilometers (in replacement of the sports drink that I am used to. Carbonated drinks do not really work well with me).

At some point after the turnaround, Smacky caught up with me and I ran with him for a few kilometers.  Took half pack gel on the 15th kilometer.  I was already slowing down on the 17th when Sir Jovie (Bald Runner) appeared behind me.  As he said the day before, this will be an easy run for him.  Running side by side with him pushed me and gave me the needed boost.  I must ensure I would at least trail behind, which is what happened.  He told me there will be support at the 21st.  Gatorade and the sweet little drink, I’m excited!  Before the 21st, I took out my salt caps and ugh, support is not there. I just pushed myself harder so I’ll reach a station before the salt caps melt.  Finally, at the 25th, we saw the BR Staff.  I took about one minute break at the station, finishing the remaining half GU gel roctane from what I took on the 15th, had my gatorade mix and iced myself.  I took 3 small packs of Gatorade mix.  This break was heaven!  I knew that the sun is going to be more punishing from here on.

After the 25th, we passed by one long bridge, then run through another long stretch of rice fields.  Somewhere near the aid station was about 50meters of a shaded route plus lots of people cheering.     At this aid station, they gave out power gels which I gladly kept.  I saw BR before the turnaround, he said it was near.  It was great to finally see faces of people I come across with at the second turnaround.  We cheered on each other.  I guess I was Gu’ed and hydrated enough, energy level was still high.  It’s the 27th kilometer at this point, I was praying it lasts for another 10mile.

I saw the Team BR aid station again and got some refill.  Took lesser time for this break, 20 seconds, as I am already foreseeing a slowdown with the heat.  Every second is starting to matter.

I was still running alongside the same guys (didn’t get their names but the one in yellow and another guy who was topless).  The 30th until the turnaround was uphill. This is going to be the last turnaround point.  As soon as I reached the last RFID mat, I said my thanksgiving.  The energy was still there and I can still cheer and smile to fellow runners as I ran back.  It’s the 36th kilometer!  I saw the support of Team BR again and took another gel plus gato mix and packed my ‘baon’ for the last six kilometers.

I could still see PAU-friend Abet Henson in his white singlet, ahead of me by probably 50m or less.  I told myself that I should maintain a sight of him so I won’t lose the steam.  I was running a lot slower.  Water station abounds and cheerers as well!

Oh well, maintain the good vibes, I just focused on my breathing and prayed that the heat won’t hit me that much.  I still have enough energy at that time, just kept on putting one foot in front of the other.  I didn’t mind the short steep uphills on the course and still run through it.  Walking might kill my momentum.

I took one sip of water at each station, doused myself, sponged and took another two pieces of sponge to sustain me until the next station.  This has been my routine at each station.  The cold sponge was perfect though I might have scrubbed my face too much (got breakouts on my face after Camsur!).  Running around the big lake doesn’t seem to end (I wish there was an option to wakeboard to the other end), then we went through the smaller lake, then the beginners area. Woah! Last 600 meters.

Stepping out of the wakeboarding area was blissful.  Loud cheers started, I feel like I’m doing the last repetition of the speed workout.  Tired but the ordeal is finally ending!  Several right turns and the cameras started flashing. (Yeah, I did try to give it a good pose.  What’s a good finish without a good picture, right?)

I was the 13th female in the list, with ten of them on ‘elite’ status (my assumption based on their finish time and foreign names of some).

Now, I can tick one of my goals for the year and move to the next one! 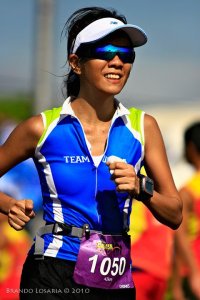 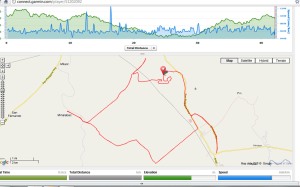 Now, back to my birthday celebration!  Running to celebrate my birthday is not bad at all. You’ll always be remembered, until the next one!

And to my dearest mother, Happy birthday! This is for you.

Thanks to Coach Rio, the Camsur Govt and to everyone involved in the Race and Event Organization! clap, clap, clap

To the people of Naga City and Camarines Sur – Thanks! You have been hospitable from the moment I stepped down from the plane.  Your support to us, runners,  throughout the course is unparalleled! We could not have done it without you.  See you next year!

To fellow runners – thanks for the cheers and encouragement as we share those hot paved roads!

To my team, the Bald Runner Professionals-Team Ultra, my TGIS gang – always a joy training and racing with you. Off to the next guys!

To the Team BR-elites and the BR staff and Sir Jovie – for the BR Speed Training Clinic that never cease to ‘train’ aka punish us.   The P.R. is for you guys!

To my friends who prayed for me, hope you’ll join me and run soon. LOL!

And to God, who is the source of my strength.  Glory be to You!