It is quite coincidental that I always fail to update my post during the holiday season.  I posted a “Blast from the Past” post same period of last year.

Sometime in November 2010, I’ve decided to temporarily put this blog to private mode so I can make the changes I was planning on doing – new layout, new pages, new header —- Well, I’m back and those changes did not happen.  My last post was before PAU-50K Run Tagaytay to Nasugbu Run.   I never really stopped running.  In fact, I have made some changes in my training schedule and updating this blog took a backseat.

Well, let me try to recap the highlights of my last quarter for 2010. 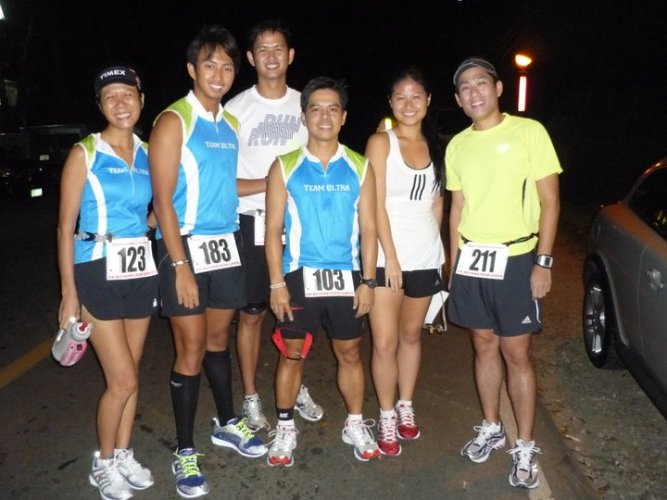 Team at the Starting Line with new ultramarathon recruit Smacky

I have the PAU T2N in my list of races to join in 2010.  This shall be my last major race for the year, the rest will be part of my training runs.  It’s a 50kilometer ultramarathon race of the Philippine Association of Ultrarunners which starts at the DAP in Tagaytay and ends in Nasugbu.

Race started at 5am.  I have Helen and driver Edgar as my support.  Jerry and I will be sharing my support vehicle.  My goal was to finish it before six-hours.

I pushed the pace at the start, taking advantage of the downhills and slowed down and recover on the uphills.  The plan was to push again after the Robinsons Mall as these are mostly downhill.  This will save me time of being exposed to the heat of the sun when we finally reach Batangas which will be a long stretch of ricefields with no shade at all. 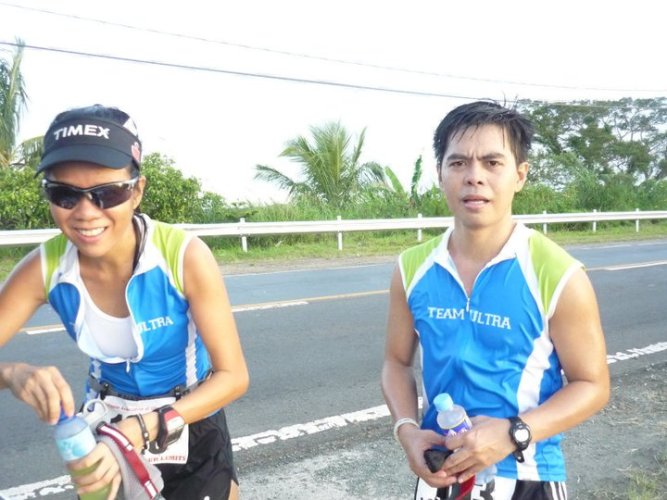 I ran alongside Jerry until he decided to push pace further.  At this time, I was experiencing discomfort already; a stinging pain on my tummy.  I shrugged it off and kept on pace.  I glanced at my watch and knew I can even hit a 5:30ish finish if I maintain.  That didn’t happen, with about 8 kilometers left in the race, I had to slow down and maintain a slower pace.  I crossed the finish line in 5:40sh.   I was the 4th female and 45th of almost 200 participants(?). 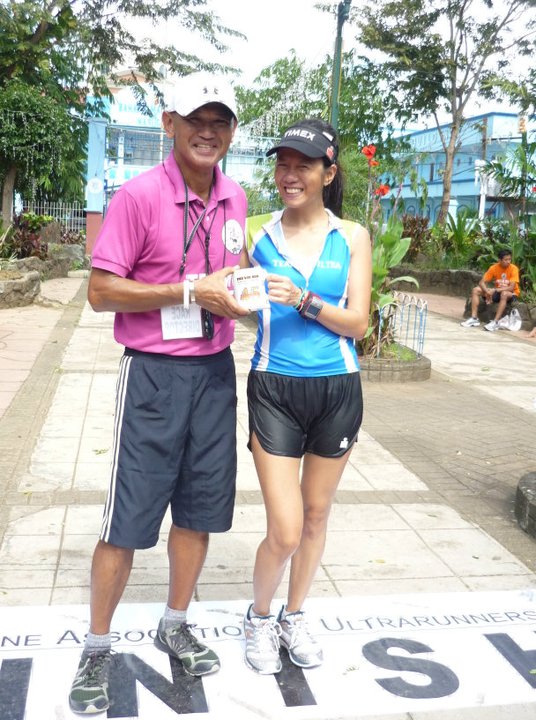 A few minutes after crossing the finish line, I started to feel the pain more.  I stayed in the car and turned on the airconditioning, I was having cold sweats already.  I had to pee, according to the husband of Helen who is a Urologist.  It was a painful hour or more in the car.  Out of fear probably of going to the hospital, I was able to pee.  There was still a bit of discomfort but slowly the pain subside.  I initially suspected it was UTI but after several test the day after, it was ruled out that I had what is called, Exercise Dysuria.  Explanation from Dr. Omar says, ” Long periods of exercise can mess up one’s urinary function.  You can have pain (dysuria), retention (inability to void), and hematuria (blood in urine).  The last one is particularly caused by dehydration.  In my case, it was the first two.  Now, when one is running and continually ignoring the urge to void, you are in effect programming your brain to maintain urinary sphincter to contraction even if the bladder is already full.  Now when one stop running and wants to urinate,your brain and body might still be in a state of exercise.” And I thought that was a talent for me as I always have an uneventful ultramarathon – I have never experienced having to pee in the middle of the race “by the road or by the bushes” as what some female ultramarathoners have shared.  It was a good lesson for me to learn.  The doctor told me that if I’ve pushed or run further, my condition could have worsen.  Thank God, it happened now – at least I know for my longer race where I need to run another 52k after 50.

Everything’s good, still had some time to enjoy a good lunch in Punta Fuego with my teammates hoping to catch the Manny Pacquiao fight (which didn’t happen).

Now, off to a recovery week. Nah, didn’t actually took time off.

The following weekend, my whole team joined the Unilab 32K Run.  I’ve been missing on joining Runrio events and this is a good errr recovery run!?

Welcoming Mark and Manager Randy back

After my 32K run, the training schedule requires me to start racking up my milleage in preparation for BDM.  A back-to-back long run was in order for the weekend.  My long run training partner Jerry beg-off for that weekend so I decided to just join a 10-K race at the Karunungan 100 and run another 15K after the race.  It was a very convenient choice as it starts in Meralco (few minutes from my house) and the last U-turn is actually in front of our village gate so going straight home when all else fail is an option =).

The starting line was unlike the usual run I’ve joined where you know almost everyone.  Except for Bobby and his team, I guess the usual faces are at the BGC Run in Fort with chance to win a Chevy =).  Most of my friends and teammates are there.  I was at the Karunungan Run with Helen.  (Helen and I started training together for this week, doing our scheduled speed workouts, given that we have almost the same goal.)

Ready to Train for our BDM dream and TBR Dream Marathon. Thanks Jeff Javellanosa for the Picture!

I saw some Kenyans and elite female runners.  I told Liza Diaz that it’s a sure win for her, she pointed out two more elite competition.  Okay, all seats taken!  This is going to be an easy run for me – and that’s exactly what happened.  I just tried to cruise along the route testing my speed which is still relaxed but not too slow.   The run started at the Meralco compound which took us out to Green Meadows.  The terrain was mostly rolling, especially upon entering the Meralco compound again which brought us to a really steep climb.  (Wow, this is so near my place and can be a training ground!).  Going out again along Ortigas Avenue, Cris Sabal told me that I was the fourth female and the next girl is five minutes away.  Oh, well, will see, that is one kilometer away. – We were already 6 kilometers in the race at that time.  After that, the terrain was quite easy but the polluted air was quite a challenge.  We were taken to another climb at the flyover.

I didn't realize I have that much muscles on my legs =)

I was expecting a left turn by the road of St. Paul School but we were asked to go straight.  At this point I knew something is wrong if we are to follow the original route.  (I always drive around that area and I know the distance by heart!).  I just put one foot in front of the other.  About one kilometer more to go, I saw the third female on her way back from the turnaround.  (less than a kilometer away!).    I pushed my pace with thoughts of possibly closing the gap, reaching the last turnaround which is our village-gate.  I asked the guy I’ve been running side by side with if we are at the right route.  It’s 600meters to go before 10kilometers and it looks like we’re still 3k away from the finish line.    I knew it! My garmin beeped 10K after 51 minutes (not a PR though).  A few meters after, we turned right going towards St. Paul and back to the finish line.  My body was willing to push but the thought that it was an extra distance got me out of focus.  I took the last few kilometers slower and finished in 1 hour 8 minutes for about 13kilometer of distance.  The girl at the chute took my name and listed me as fourth female.   I was happy with the run.  My goals were achieved and the surprisingly hard terrain gave me enough test of my speed endurance.  At the back of my mind though, it could have been better if they give awards for top 5, no?   I was happy though as I believe some of our Pinoy elites were able to beat the Kenyans.  (Hmmm even super small race like this has been invaded).

To cap the month of November, I joined my friends for a bike ride at the unopened portion of the Star Toll in Batangas the following day.  I just have to tick a long ride in my training list.  I would say this is my first real ride as I have only biked thrice-once in Fort on my very noob days and twice around Camp Aguinaldo, both for about 10-16k only.

Starting in the Dark-Brave enough to tackle the headwinds and the hills!

I finished the ride earlier than my friends, 28 kilometers of it while my friends took one more loop giving them 40plus kilometers.  Bored driver even told me as I reached our parking area, Wow, you’re first! Ugh, get the bike now, my shoulders and arms are so sore.  It was a hard but peaceful ride – no mishaps!

Ahhh there goes my November!  Back to the training drawing board for December.