Blast from the Past 2-January

January was not as eventful in terms of races.  Most of my weekends (and weekdays) are spent training.  Of course, I work on the side =)

My long runs should be at its peak for this month in preparation for Condura Marathon which is scheduled on February 6.  Other than BDM, this is the race I have been preparing for.  At the start of the year, I revisited my training schedule and realized I’ve actually had all my week nights full for training.  (which means I only have one night in a week to have a decent dinner at home or with friends)  I made adjustments to my schedule and decided to go on with a so called ‘athletes-like sched’ aka lola sched.  Early to bed, early to rise.

I stopped taking my bike out for a ride out of fear of any mishaps which might take me to the sideline.  (At least after Condura and BDM).

I'm a lot better on the road than on the water. Take home-bruised thigh from the surfboard fins and this photo. I got to come back and conquer the waves one day.

After my first eventful weekend on the water, I have concluded that I can only gain milleage on the road, so I’m off to my first long run for the year.

I joined the Fat Ass 2011 Run organized by Team Clark.  It is on its second year of staging.  There are three categories, 6 hours, 12 hours, 24 hours.  Basically, one has to run at his/her own pace within those hours.  It is another gathering of most of the ultrarunners in the country.

I passed on joining the Subic International Marathon scheduled for that Sunday as I have to attend the debut of Gena in Rizal on Saturday night.

I entered myself and my friend, Mar in the 6-hours category.  Everyone was asking why I didn’t join 12 or 24h.  My goal for that weekend is to run for 36 kilometers only or push until 42K.  6 hours is more than enough to accomplish that. 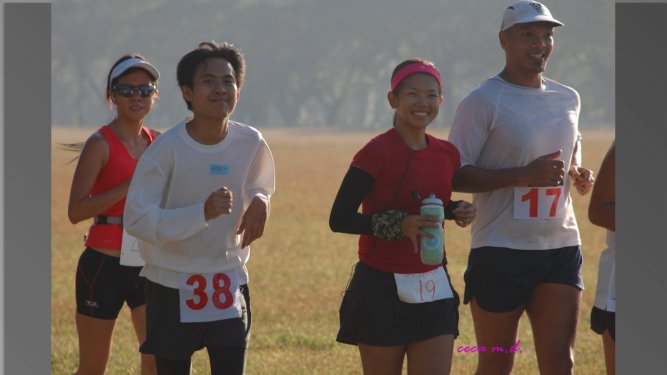 36 kilometers to run! stopped several times though as the lure of lounging around and chatting with friends was tempting.  It was a fun 6 hours of hanging out with running friends in Clark.  Too bad, we had to leave by noontime.  Congratulations to Atty. Jon and the rest of Team Clark and I’ll see you on the next edition.

The next weekend was spent doing long runs on Saturday mornings.  Ahhh got to love this new schedule, I have the whole weekend for errands, laziness, malling and I don’t need to rush to catch up on family Sunday lunch. (which has been moved to dinner cause of my sched)

Sierra Madre, as expected, was a killer.  Coming from a very intense training week and crossfit workouts, the route is like a sadists’ choice.  Well, as they say, embrace the pain in training and enjoy the race!

This weekend marks the wedding anniversary of my sister and the last weekend of my cousin Mike in the country.  Since we need to leave at 6am for the beach, I decided to do my long run as early as 3am.  Yes, you read that right-3am!  I didn’t expect this to be eventful at all.  It was going to be a fast long run as I need to meet an average of 5:50 peaking to 4:30 towards the end of mpk pace as part of my workout.  Hayyy, do we really need to do this?  Well, I’ve recruited Tere to join me that early and Coach Titus is also  joining us.  So, I really need to get up and run.

It turns out, this is not just another long run.  Three kilometers into the run, I tripped into one of those road protrusion by the sidewalk, jumped with my left foot landing on a shallow manhole from the road construction.  That was few seconds of acrobatic move witnessed by Tere who was running about twenty meters behind me.  Before I knew it, I was lying flat on the Ortigas sidewalk.  After checking for any major body injury – “defined as broken bones” – we concluded I was fine.  I wasn’t! Blood was dripping on my left knee and ankle.  My shoulders and thigh and shoulders have scratches and bruised.  But, as Coach Titus said, “Malayo sa bituka yan” (That wouldn’t kill you!).  We continue the run for another eight kilometers until we completed the loop bringing us back to my car.  I cleaned my wound in split seconds and off we run again.  Now, this is literally, embracing the pain for another 30kilometers!

Weekend long run done! Off to the beach where I surprised my cousins with my Negra and bruised look.  And they asked, “What do you get from that?”.

Finally, the last weekend of January!  This is supposed to be a short-race pace conditioning run.  I said yes to join the Crossfit entourage for the Xterra trail run in Tagaytay Midlands.  I entered the 10K Category together most of my friends from Crossfit.   Mari and Ferdie joined the 21K Category.

Almost everyone knows that I am not the trail run-type of person.  Mud and uneven surface- ??? Let’s see.

We all did well, that’s considering that most of them (except for me, Mari and Ferds) doesn’t really run and only has crossfit as their workouts.

I know, it’s a crazy idea doing a trail run before my major race.  But, I survived!  Now, when’s the next trail run.

January was gone so fast! Condura Marathon, here we come!