I was supposed to be out of town for the  first weekend of March.  Until a month ago, my friend Tere sent us a message that she has decided to run the Bataan Death March 102K.  CHANGE OF PLANS.  I’ll still be out of town, but Pampanga-Bataan bound.

As much as I would like to stop her (I know she did not train for this year’s edition compared to last year), I know she has made up her mind.  Being a crazy girl myself, I just have to support the plan of a crazy friend.

My friend Iah and I went to Pampanga on the morning of Sunday after running at Run United 1.  By the time we reach the first kilometer post, the top runners have crossed the finish line.  Almost thirteen hours have elapsed.  We started traversing the road from kilometer 68th until we see Tere. 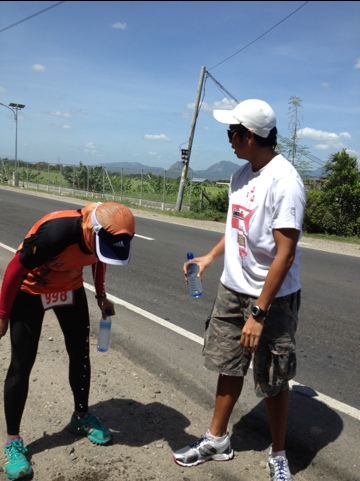 25 kilometers more to go at this point

The runners we are passing still have about five hours to make it to the finish line.  It was noontime!  Most of them looks really tired, some are limping, running/walking/dragging themselves as they put one foot in front of another. I had to hold back my tears whenever I see the face of each runner we pass by.  I silently prayed for each one.

I told Iah that it was at kilometer 70 last year when the battle begins; tiredness and sleepiness would kick in.  You just have to go on and endure another 20 kilometers and reach the 90th.  By the 90th, it is another story as you are so close already by that time.  But that was my story.  I reached the said points with spare time on hand before the cut-off.  What we are witnessing is a different story.

Tere and the runners she is sharing the road with had little time to spare.  Aside from battling with the elements, at the back of your mind, you play with the numbers if you can still cross the finish line in time or should you just throw the towel.  Tere has no more allowance left to further slow down.   She has to continue running and take her walk breaks faster.

During our nth pitstop at Razons, we checked the time and realized that if Tere wants to make it to the cut-off, she has to arrive in five minutes.  We didn’t plan to be her support so we weren’t prepared.  Good thing that Razon’s had spare ice (of course!) and that I brought several bottles of Ph7plus Water.

As if Iah predicted it, Tere arrived in five minutes.  She has 1 hour and 15 minutes left to run the next 12 kilometers.  Sounds easy, huh! Well, that is if you are starting the race fresh from a restful sleep.  After running for almost 17 hours for 90 kilometers, that just sounds insane!  (And, we are!)

There were only two questions:  Do you want to make it to cut-off?  She said “yes” and How do you feel? She said “I’m tired”

The second question doesn’t matter…who’s not tired at this point?

We retort her first answer with, “Okay, just do cross the finish line for Micah and Lorenz!”

From Razons, we started to leapfrog.  Iah was driving and shouting at Tere throughout.  I will jump out of the car and run to catch up with Tere to give her water, cola and shower her every 500 meters or less.  We ensure that we can see her at least from afar.

Just had a few seconds to spare to have this shot taken. Finally, a picture with a kilometer post

When we reached the Welcome San Fernando arc, it was about  2 kilometers to go (more or less).  We have a little more than six minutes to the cut-off.  Iah told Tere that it’s only less than 800 meters and just keep on running.  “Parang yasso na lang, two rounds sa ultra”

And she started running like it was a speed interval session to our surprise.  In fact, it was so hard for me to catch up with her in my loafers.

She crossed the finish line in 18 hours and 5 minutes.  She made it to the end!  She made it with pure determination!

I was in tears as I hugged her back…..and then she collapsed on me….

Panic is an understatement.  While the boys carry her and DocT administer emergency procedures, I tried to lower her body temperature by pouring cold water and kept talking to her and ensure she keeps her consciousness.

Tere might not have broken her PR in BDM 2012 but she just made another history – a different kind of finish!!! (Ano pa kaya next year?)

A few minutes after recovering. (With DocT, a fellow ultramarathoner)

Running an ultramarathon is a different game.  Each runner has their own stories to tell.  Each runner has their own battle.  The lead pack battles for beating the course record, the middle pack battles for a good strong finish, the tail end battles for the cut-off time.  The only thing common to them is they are all brave enough to toe the starting line.  And that in itself, makes everyone a Champion for me, all 186 starters last March 4, 2012!

Congratulations Batch 2012!  You have made history.

To those who are still dilly dallying if they should do it or not, if you have two legs, why not?  All you need to do is decide (TODAY) and start training physically, mentally and emotionally.  See you in 2013!