“……..Lastly, this whole throwdown is a win-win situation. Just by signing up for this competition is a victory in itself, a victory over your fears, hesitations, doubts and weaknesses. You will come out better, trust me. After this, say hello to a new, fitter & tougher you.”

This was part of the first of the many motivational notes that our Coach, Raf Timan posted in our secret Team Raf facebook page before the start of the competition.

I have never done toes to bar as fast and as smooth as I did during the competition.

I have always ran 400 meter repetitions but going faster than 1:20 has always been unexplored, I did 1:15!

FML, I can’t jump rope! Really, I CAN NOT! I did my first twenty double unders during the competition. (Before you congratulate me though, that’s not straight DUs).  It was one every so many minutes of trying.  Coach Pau celebrated his birthday during the month of the throwdown and I told him, I’ll do DUs in honor of him.  So, I did!

I have always thought of the box as a place to cross train for running.  The throwdown has been my main ingredient in pushing myself to finish the Milo marathon without proper training.  GPP plus going further when there’s every reason to stop. ( will share about my eventful Milo Marathon soon)

Lastly, the Throwdown has taught me the lesson of being one for others.  My final throwdown event just hit me straight to my heart.

It was a a week full of anxiety.  We were all praying for a WOD that we are all capable of competing in.  Just tell me I don’t need to use the jump ropes and I can celebrate.  A few days before the event, it became clear that I won’t be competing in an event with DUs.  And on the day my competition WOD was announced, I just have to rejoice!  I only need to run 2 kilometers with a 14 pound medicine ball.  Dang!  Me and Noel were rejoicing and told ourselves we’ll do it at a real suicidal pace for the Box! ……until, we learned that we have to do it with a partner and we cannot go a meter away from each other.  So, I have to run with my teammate, Liza.  I have to admit, I was disappointed.   Coach Pau & Raf knew how much…

The game has changed…Liza hates running.  We exchanged messages and set our game plan. I have to carry the ball the entire 2K and set a pace that will ensure we finish, Alive and Smiling.  Carrying the weight was not too difficult but the ball was too big to hug, it numbs my arms maintaining it at same position.

We were on pace at the first kilometer until Liza stopped and said she can see stars.  I knew the race has started for us.  We jogged, we walked, we chatted…I tried to hold her and push her at her back when she’d say she needs to stop.  (Apparently, she wasn’t exaggerating when she said she sees Stars.).  I almost killed her… or rather strangled her, actually.  I think that was the highlight of our run.  Liz was telling me she can’t breathe…I poured water, asked her to breathe deeper and was about to panic until she said, “don’t pull my shirt, I can’t breathe.”   It was the last 300 meters.  We had a  good laugh then she started walking and running faster again…We won! We didn’t get to beat the other 10 teams, but we finished and well, still beating about 6 I think.  It was her first 2 kilometers; it was my most precious 2 kilometers. 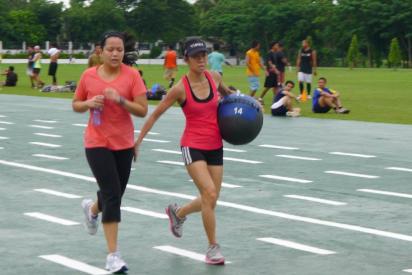 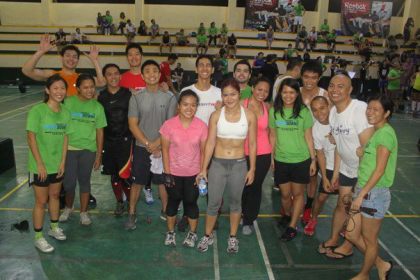 The Best Teammates ever! Team Raf 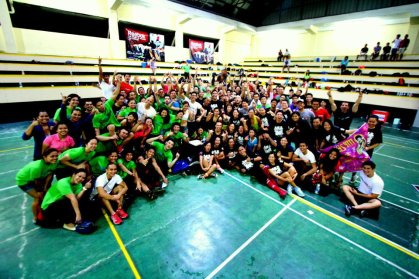 The Crossfit Mnl family. We aim to be better each day…