Racing is fun but racing with friends is more fun…

Running is fun but running through mud is more fun ;

We joined the Brave Mudders as a team. We were one big delegation of 47 teams of five crossfitters from both Fort and Libis.

CrossfitMNL Libis and Fort: One Box!

I was with the Team of Smacky, Helen, Alvin and Chris. Amongst all the Libis teams, we are the only team with members who regularly join fun runs. I wanted to take it easy and just enjoy the race but there was a “throwdown joke” before the race started. Libis vs Fort, just like the throwdown days! Fort has the Team Whitey (which includes Erwan – chase Erwan. why not, right? kidding, Anne) as their strongest team. Enjoying the race was redefined as Chasing the Whiteys of Fort! 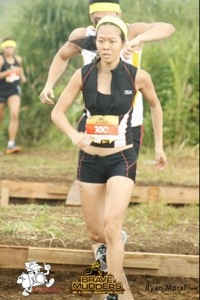 Start of the Chase 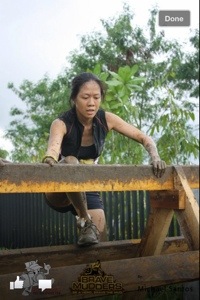 We kinda think this should have been higher. (but, well I have fear of heights…)

Carry a sack and Run. I was running behind the Fort’s Whiteys and Smacky when we reached this point. In Crossfit, there are different prescribed weights for male and female. So, stupid me asked the marshal “same for boys and girls”. There, I look like I just came out of a big explosion. (How come the other teams still look okay, parang nag-shopping lang sa Divi)

Ran faster, swam in the mud and then got lost somewhere in the middle of the mud…(but hey, i really braved the mud!) 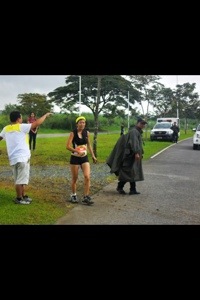 We reached the finish line one by one. Fort’s Team Whitey already have four members. So, we both had to wait. We were actually excited to do the Comrade Carry as you can see in our pics.

Team Whitey and our team reached the finish line first from Crossfit. What we didn’t know is that the award would go to those WHO LITERALLY BRAVED THE MUD – Congrats Lars and ROvilson for being King and Queen. Sulit sa mud ang reg fee!

And to KP and Auntie for the Best Actor and Actress Award. 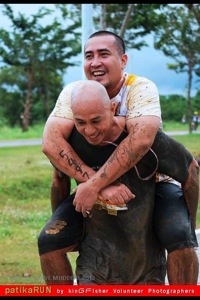 Now, this wins the Sweetest Couple Award! I hope the wives won’t read my blog.

Congratulations to the organizers! It was one fun MUD and OBSTACLE Run. See you next year!</p